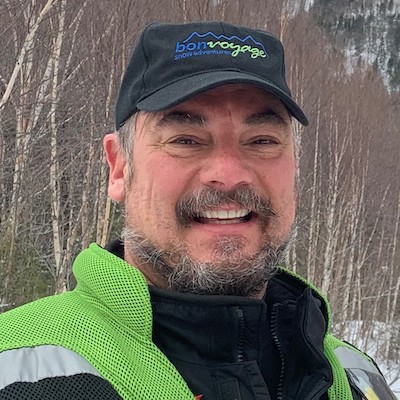 Mark Wolf was born and raised in western New York. He served in and retired from the Air Force as a Master Sargent. He started working on the A10 when the A10 was a very new aircraft. During the course of his career he was stationed in Denver, CO, Myrtle Beach, SC, Dayton, OH, Osan, South Korea, Biloxi, MS and Southaven, MS. He has four children and one grandson and is currently living in Batavia, NY. The second phase of his career is as the general manager of a casino.

About ten years ago, after a very short ride on a friends snowmobile, he stated “That is going to be a very expensive ride.” His friends looked puzzled, but he knew he was hooked. His first sled was a two-up 380 fan he paid $200 for. Five sleds later he is riding a 2020 850 Renegade X.

Snowmobiling is by far his passion. Next would be motorcycling. He rides about 10,000 miles a year.

Mark started as a customer with Bonvoyage five years ago on a Big Bore Trip. He has been hooked since and can’t get enough of Quebec. For Mark, the extra time it takes to get to Quebec is time and money well spent.

The highlight of his winter is seeing the reaction of his customers to our trips.